When someone comes to visit me for a session at my office, I like to watch them stand as the communicate with me the reason for their visit. I’m looking for how they entered the room, or got up from the chair. I’m looking at the way their body settles into gravity and most importantly, I’m looking for relationships.

There are a million questions that are running through my head while I create a Therapeutic Model. Using this system I’ve learned that while patterns can be useful, every body is different and I’ve got to be willing to let go of things I knew were true and embrace what my finding are.

Lately, I’ve been flashing on a phrase that Dr. Ida Rolf said many years before I was born. “It is where it ain’t”. Speaking of pain in the body and finding the root cause.

Nearly the only time local pain is really the point of origin is from direct injury to the site. Apart from that, there are simply so many factors that contribute to why there is pain in an area that I’m devoting a several part series to the topic.

In this part, we’ll look at the Global Theory of local pain or why it’s so important to take in the body as a whole when working with a single part.

First lets look at fascia and it’s role in connecting and unifying the body. Fasica is connective tissue and it’s outermost layer called superficial fascia is really key to understand the interconnected body. We can think of the skin and first relatively loose layer on the outside as the superficial fascial layer. It covers and protect the outside of the body, it’s been called the “Golden Fleece” by Gil Headly who also produced a fascinating series on human anatomy called Integral Anatomy. 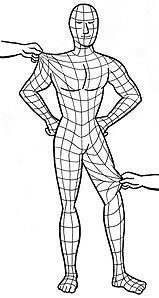 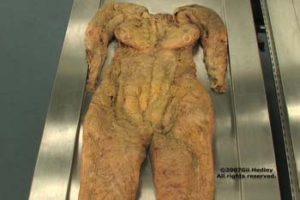 As see in the photo, this really is a singular unit of tissue. A whole, a one. It provides a protective, sensitive layer to the inside structures. It’s tough, it would be very difficult to tear and it give the external shape.

In the other image we see a model of the 3-d relationships of that happens when there is strain on this tissue. The whole thing responds and often moves toward the point of strain.

I would argue that 90% of massage sessions are done on this layer. Occasionally a therapist will reach deeper into the muscle layer (more on that later), but in large part most massage is done to the superficial layer.

What I’m finding is that where the superfical layer is strong and cohesive it is happy. Where is is thin and weak and is miserable. There are laces it can get dense and thick and limit movement but in large part that doesn’t cause pain.

I will argue that in large part, the are of pain needs to be considered simply as one message in the larger narrative of the bodies story. Usually the place of pain is the place of most need and my work there is often nurturing and supportive.

Here is the game: We need to ask ourselves “Why is this area under duress, and what is contributing to that?” By using the superficial layer as a model we know we have to zoom out and look a the body as a whole.

In future parts we’ll examine  the deep fascial layer, muscle interconnection, organ placement and integration of the system as a whole

Sorry, the comment form is closed at this time.