Posted at 10:25h in Uncategorized by Maureen Werther 0 Comments 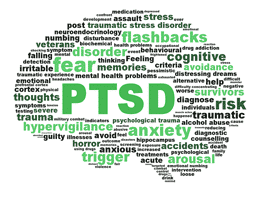 Given the recent horrific national and global events, and considering the stress and tension under which we all seem to be living in today’s world, we thought it would be a good time to talk about post-traumatic stress syndrome (PTSD) and the role massage can play as part of a holistic treatment plan.

In 2000, just one year before the tragic events of September 11th, the American Massage Therapy Association (AMTA) wrote an article about post-traumatic stress syndrome and how massage can benefit people suffering from it. At the time, instances of PTSD in the general population were already pretty high. One year later, on that fateful day in September, the world as we knew it changed and PTSD became – unfortunately – a household term.

Today, in addition to members of the armed forces who return home and find themselves unable to cope with the seemingly mundane responsibilities of daily life, there are countless others who are victims of abuse, senseless violence or natural disaster.

Although the number of PTSD sufferers has risen exponentially since 2000, that article by AMTA continues to be salient and offers valuable advice and guidance to massage therapists in their treatment of PTSD sufferers. It also offers documented information about the success of holistic and alternative treatment methods to people seeking relief from their affliction.

This is only one of many studies and article that document the benefits to be derived by alternative treatments for PTSD. One need only google “PTSD and massage” to find a long list of information talking about how and why massage can benefit people with PTSD.

PTSD – what is it, what causes it, and who suffers from it?

Briefly defined, PTSD is classified as an anxiety disorder and is caused by witnessing or being a victim of a life-threatening event. While many members of our armed forces suffer from PTSD, members of the general population, such as those who have been victims of assault, sexual abuse, abandonment, natural disasters or other catastrophic events, can also suffer from the disorder. Symptoms of PTSD include, but are not limited to, the following:

Again, these are just some of the symptoms associated with PTSD, and the job of an experienced massage therapist is to recognize the client’s predominant symptoms and work with him/her to develop a rapport and create an environment that facilitates trust, safety, and – ultimately – healing.

How can it be treated?

The individual suffering from PTSD has, in most cases, lost the abilities to trust, form human connections and bonds, feel safe in the world, or value themselves.  Many treatments center around medication and psychological counseling, both of which can be critical components of the treatment plan.

However, there are many reasons why massage therapy can be a valuable part of a PTSD treatment program. We already know that massage therapy – whether it is Swedish, Thai, or any other type of practice – reduces levels of cortisol and increases the levels of dopamine and serotonin. Cortisol is responsible for increasing our feelings of anxiety, stress, and “fight or flight” behavior. Serotonin works to reduce our perception of pain, help regulate sleep/wake cycles, and elevate our mood. And dopamine just plain old makes us feel good!

Massage therapy can also be very effective when used in conjunction with other holistic approaches such as Reiki, acupuncture and meditation.  A 2007 study conducted at Fort Bliss Restoration and Resilience Center in Texas found that soldiers who participated in the holistic treatment approach showed a marked improvement in their levels of well-being, sleep patterns, and human connections.

In fact, out of approximately three dozen soldiers who participated in the study, twelve were able to return to their units and only two ultimately left military service.

This doesn’t happen overnight and PTSD sufferers may need to “try out” several massage therapists until they find the person with whom they can feel safe, secure, and relaxed. But, the healing power of touch should not be underestimated and can be very beneficial in helping PTSD sufferers re-connect with themselves and others and begin to live the kind of life they deserve.

Sorry, the comment form is closed at this time.